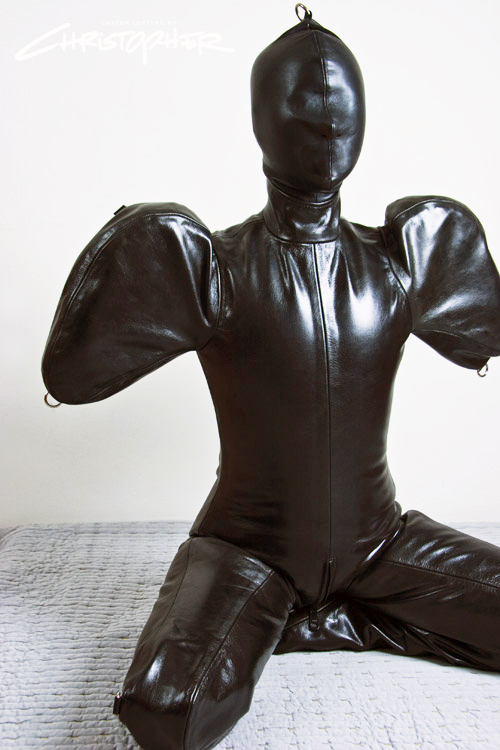 What is an F-Suit? It’s a suit to be worn when you are making love with your partner. F-Suit is short for ‘Fuck Suit’ – a garment with a zipper through the crotch made especially for kinky people. Do these Fuck-Suit photos speak to you? I guess they would fall under the category of Mummification?

This amazing garment was made by Christopher, a leathercrafter in Los Angeles. Christopher is an fetish artist who hand-crafts kinky leather gear in his spare time, as a hobby. He makes hoods, sleepsacks, F-Suits, Butterfly Straitjackets and a host of other unusual pieces. His work is commissioned by fetish people all over the world. Each piece is one-of-a-kind and not available in stores.

I met Christopher during a photoshoot with GwenMedia.com back in 2006, and after exchanging some formalities Christopher pulled out a prototype of his famous Butterfly Straitjacket. I was blown away, and not long after that we got together to shoot photos which can be seen in this vintage article titled Wings of a Butterfly. A few years later we did another photoshoot with Christopher’s F-Suit titled Meet Ashley Renee. 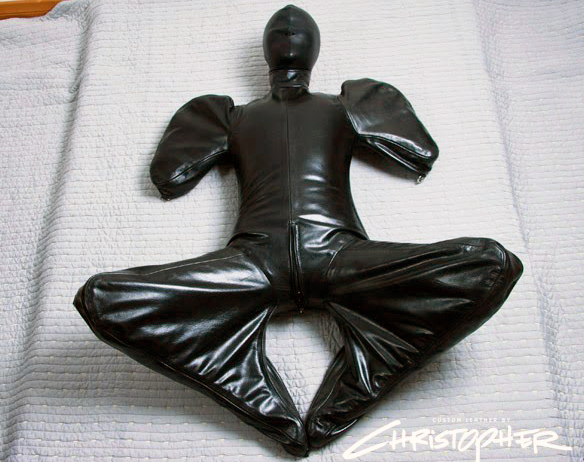 Full-coverage restrictive leather suits for restraining women is not a new idea, variations of the sleepsack combined with arm binders were featured in black and white photos from the Betty Page and Irving Claw days of the 1930’s.

Christopher is designing some leather gear for us which will be featured on our websites in the future. You can view all of Christopher’s work on his Leathercraft Journal blog. Keep up the good work Christopher, we can’t wait to see what you are making for us!

More images of the Butterfly Straitjacket and Fuck-Suit can be found on SeriousImages.com. Also visit SeriousMaleBondage.com for other unique bondage scenes.