One of my favorite pictures is one I saw on the bondage site www.eckie.com (the picture is no longer there).  It showed a guy tied to a roasting spit which had a handle for turning, with a fire below that was slowly roasting him.  It was obviously a made-up picture, but I’ve often thought of what it would be like to be in a situation like that, uh, temporarily, that is.  I had told my friend Mumman about this picture, and he said that he could mummify me on a horizontal bar so I could at least see what that part was like.  He said he’d done this type of mummification before, so at least this time, I wouldn’t be the first one trying out something new – which is something that I find myself doing a lot at the SeriousBondage Institute (SBI). I didn’t think further about it until, one afternoon, when a group of us were out on the backyard deck of SBI, he suggested trying it.  I’d been watching others being put into bondage all afternoon, so I was game to join in and try something I’d never done before. 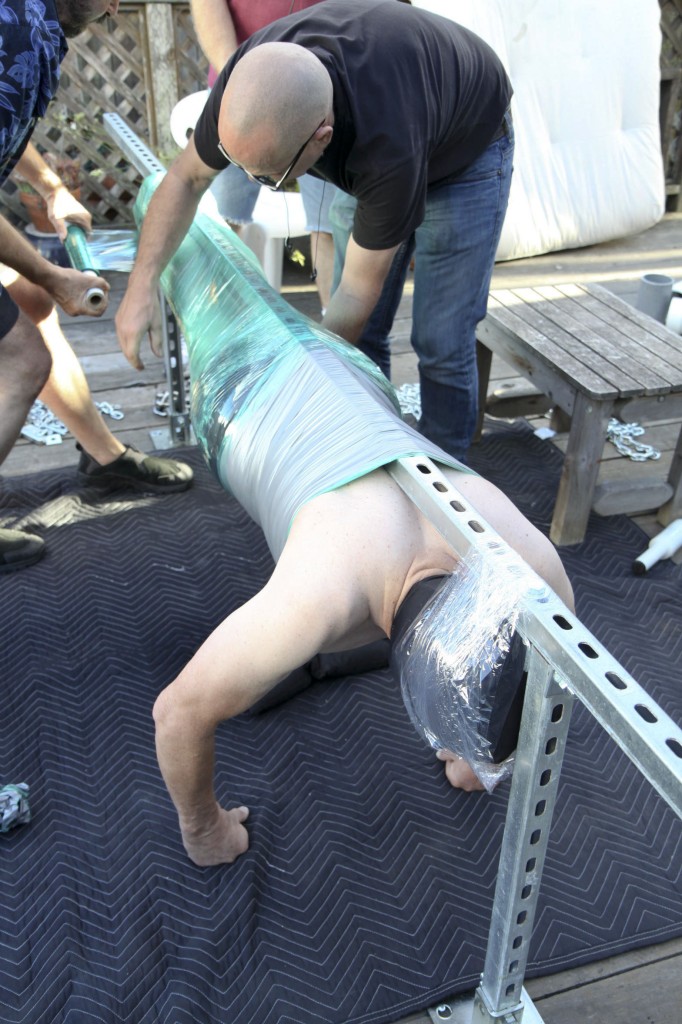 First was to get the horizontal bar set up, strong enough to support me, and with no other objects around.  There had been other activity going on, so it took a bit of time to get things ready.  I stripped off my clothes and put on some neoprene shorts.  I assumed a position of being face down on my hands and knees with my mid-section adjacent to the bar.  I’m 6 feet tall, so the supports for the bar needed to be at least 6 feet apart.  And the height of the bar needed to correspond to the height that my mid-section would be in when I was on my hands and knees.

I was surprised to later find out that everyone else there participated in this process.  Mumman, Dalton Ott and Lewis all helped in my mummification, while Mark shot video and Brianna took still pictures.

Mumman got the plastic wrap ready and started wrapping it around my mid-section and the bar.  He needed to put it around me many times for it to be strong enough to support my weight.  When this was done, he started wrapping duct tape around the plastic wrap, several times to make it strong enough to further support my weight.  At this point I was still supported by my hands and knees.

While Mumman was duct taping my mid-section, Dalton Ott put a neoprene hood on my head and started winding the plastic wrap around the top of it.  He didn’t cover my nose or mouth, so I was able to continue breathing.

When Mumman had finished wrapping duct tape around my mid-section, Dalton stopped  winding the plastic wrap around the top of my head, and the two lifted my legs and feet up to the bar.  That’s the most unique way I’ve ever “stepped up to the bar” so to speak…  I was still supporting my front section with my hands.  While Dalton kept my feet supported, Mumman started winding plastic wrap around my legs and feet.

It took a lot of plastic wrap to completely do this to Mumman’s satisfaction, making it strong enough to support my weight.  One of the spools of plastic wrap ran out, and Dalton started in with a second spool.

When enough layers of wrap were around my legs to support them, my arms were brought up parallel with my body, as if I were in a sleep sack.  This meant no longer supporting myself, and it took a lot of trust on my part as I didn’t want to fall flat on my face if something went wrong.  I trusted that enough plastic wrap and duct tape had been applied to support my weight from the bar, and to my relief, there was enough.  I was now completely attached to the bar a couple of feet off the deck.

Now all that was left to do was to start the fire underneath me, however it was too late in the day to have me completely roasted by dinner time. In addition, there was no way of turning the bar to ensure that I was roasted evenly on all sides. As a result, they decided against the roasting, and instead, Dalton just sat back in a chair and rested his feet on the pole above me.  After a while I was released we all went out for dinner. What a great afternoon. ~Mister-X

For videos of exciting mummification and bondage scenes, please visit SeriousImages.com and SeriousMaleBondage.com.