After watching various people being encased in fiberglass at the Serious Bondage Institute (SBI) I wanted to give it a try myself. I wanted to finally feel the helplessness that comes with being in a rigid and unforgiving fiberglass cast. It’s the perfect predicament bondage – having to deal with everyday life while having your body or limb stuck in a certain position. The challenge is to problem-solve all of your everyday activities because you are simply stuck in a cast and can’t do things the way your normally do. Your normal routines don’t quite work under these abnormal conditions. (drools!) Plus, a cast is something that you can wear in public and no one will think twice about how odd or kinky it may be. Just make sure you have a good story to go along with whatever cast you are stuck in because people will certainly ask you about it.

After a little convincing and flaunting of my poor puppy dog eyes I was able to persuade Mark and Dalton to use me as their next casting victim. I didn’t want to be cast in a position they had already done before, so with some brainstorming we came up with a fun scenario in which I could stay casted for 24 hours. Even though I have no problem doing kink in public, this was a position in which I could be seen in public and appear ‘somewhat normal’. After all, I love seeing people’s faces around me when this kind of play is being done.

Once Dalton had all the casting supplies ready, I first put on a white shirt to help protect my skin from the fiberglass before white cotton wrap was applied. As a result, my upper body was covered in white and ready for the fiberglass to be applied over. The position that was chosen had my left arm raised to my side. (I was thinking ahead enough to have Dalton cast my left side since I am a right-handed. –laughs-) As time passed my left arm was getting tired, so Dalton worked a wooden dowel into the cast to give my arm some support. This helped relieve any stress points that could arise as the cast became rigid. In the beginning, this whole casting idea didn’t seem too crazy, but little did I know what I had got myself into.

‘Edging’ is another important casting technique because the cast was applied under my right arm. My white tee shirt was cut and wrapped all around the edges of the cast to prevents chaffing and prevent the fiberglass edge from rubbing into my underarm and neck. Trust me, this would not be fun. Dalton cut my shirt and rolled it around the outside of the fiberglass and worked it into the resin to keep it in place.

Once the cast was hardened around my torso and arm, I felt comfy but restricted. I found it hard to stop trying to support my arm in the cast. Habits told me to help hold up my arm, but I had to keep telling myself over and over just to relax my arm in the cast. After reminding myself a few dozen times I didn’t have any more problems. At this point it was time for me to begin my true casting adventure…

The ride home that evening was interesting. MummyEd volunteered to give me a ride to my friend’s apartment where I was staying, but the first problem was getting into his van. Since my left arm was sticking out my left side, the cast ended up right next to his head while he was driving. Any slight swerve of the van and I could hit him right in the face. -laughs- Thankfully we made to my friend’s place and he didn’t end up with a black eye. Since we were arriving rather late, nobody saw me going up in the elevator. Once I was safely inside my friend’s apartment, I fired up my webcam to show everyone the strange predicament I was in. My friend I was staying with works nights, so she wouldn’t be home until much later. What a surprise she would be in for!

Okay, the time of reckoning was at hand. I had to use the bathroom before going to bed, but unfortunately, when we were doing the casting, nobody thought about using the bathroom! I found that I couldn’t wrap my right hand around my backside to wipe myself if I had to do a number-2. How embarrassing would it be if I became sick with an  upset stomach or had to go number-2 while in the cast? “Hello, MymmyEd? I have a favor to ask… can you come over and wipe my butt for me?” LOL! The other problem was that I didn’t fit in the shower – let alone be able to use it because of the casting. I would just have to wait until the following day when the cast was removed if I needed to do either of those two things.

Bedtime. Thankfully my friend had a huge bed so I could avoid hitting her with my rigid arm. Laying on my back wasn’t too comfy. Especially when I usually sleep on my side. I turned and tried to see what it felt like lying on my right side with my arm sticking up in the air. To my surprise it was rather comfy, but man, I bet I looked silly sleeping like that.

The morning came. I had got some sleep but it wasn’t the best. Also, my friend didn’t have any bruises, which was good. I thought to myself that so far this experience wasn’t too bad. However, a new problem showed itself while getting ready to go back to the SeriousBondage Institute. I discovered that taking my clothes off was a hell of a lot easier than putting them back on. Both arms were limited with movement. So after some wiggling and adjusting to different positions I was able to get my panty and jeans on again. Now for the shoes…..crap! No way I could lean over to put them on. Thankfully with a little work they slid on since they were already tied from the night before. MummyEd was on his way to pick me up so I had to hurry and touch up my makeup. I finished just as I heard the door bell ring.

Back down the elevator. This time I passed a few people and got some looks from them. He he he. It made me laugh inside. Back in the van and more dodging of my arm with MummyEd’s head. As we approached the Institute we thought it would be fun to park way down the street and get out of the van in front of a Starbucks to see people’s reactions. This was the public attention I adored. Just as I wanted, people starred at me while I was climbing out of the van and walking the few blocks back to SBI.

MummyEd and I had a blast posing for some still photos and goofing around in front of the camera. Whenever I am with him I know it’s going to be a fun day. After shooting the stills we were getting hungry and decided to walk to the deli. Mark came a long with the video camera to cover our journey. We were in a small neighborhood in San Francisco and we saw a lot of different reactions from people on the street, like – “why the hell are you filming someone in a cast walking down the street?” etc. We got to the deli and even though it wasn’t the first time Mark had brought someone into their store in some kind of rubber or bondage, they were kinka shocked looking at me. When it was time for me to order my sandwich the woman behind the counter didn’t know what to do with herself. You could tell she was nervous. I decided to make her even more nervous by handing her the money with my arm that was in the cast. She made my sandwich, and when it was time to give her the money I had the dollar bills hanging there in my fingers of my hand in the cast. It was so funny because she slowly took the money – being vary cautious – and took it with just her fingers as if I had some kind of disease or something. It was so hard not to laugh at her reaction.

We headed back down the street and talking about what had just happened all the way back to the Institute. At this point I thought it was time to cut me out of the cast – to be free once again. However, it seems like this was not the case. I was to be casted again, adding on to the cast I already had. I decided to be a little shit and struggle just to give them a hard time. After all, I can’t let them take advantage of me so easily. Next thing I knew my free hand was handcuffed behind my back with the other cuff connected to the wood dowel support. At this point I had to go along with their program. 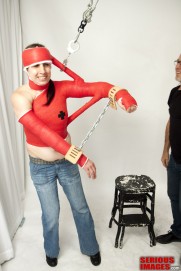 They proceeded to wrap my head with the cotton material to protect my face and hair. My whole face was covered so I couldn’t see anything but shadows of people walking around me and the feeling of fiberglass being wrapped around my head. Another wooden dowel was placed from my shoulder to my head and wrapped with the casting material to keep my head from moving. Holly shit, this was getting serious.

I was loving the feel of my body getting more and more restricted with movement; the more helpless I am the happier I am. We were all having a great time and of course once I was free from the handcuff behind my back I decided to be a little shit again and tickle Dalton. But this was a bad move. In a typical Dalton style I found my other arm being cast, this time straight out. When that cast had hardened both of my arms became completely useless. Dalton wasn’t finished. He disappeared for a second and returned with medical restraints which he used to attach both of my casted arms together. I tried to free myself but it was totally useless.

Mark took some more pictures and video of me in my helpless state, and then it was time to get cut out. Getting my head cut out with a special vibrating saw went a little more smoothly than I had envisioned. A few times there were a couple hot spots when the saw was cutting, but nothing major at all. The casting was pealed off in a few pieces and I was free at last.

This was my first time being in a cast and I will never forget it. I loved everyone involved. It truly was a great time. Thank you to the SeriousBondage Institute for helping another one of my fantasies come true.  ~Kinky_Lil_PetGirl

For a video of this fun casting scene, please visit SeriousImages.com. Check out our all-male bondage site SeriousMaleBondage.com.