Part-2of2: We finally return to the SeriousBondage Institute after having a fun afternoon at the Dore Alley Street Fair. It was rest time. Dalton gave me some juice through a straw. My mouth was pretty well clamped in the tight fiberglass cast with only a small opening, so a straw was all I could get into my mouth. Hence, a liquid diet day. Eventually all of our kinky friends went their various ways and I was able to sit in a chair in the front room in front of a fan to cool off. I was still in the fiberglass cast, not knowing what would happen next. Mark went to take a nap. After a while I got up out of the chair and went to lie down on a soft cot, dozing off periodically. By-and-by, the need to piss became an issue, however I found that I could not get up off the cot by myself. And, even if I did, in my helpless state I couldn’t unzip my zentai suit to urinate! As a result, I had to wake Mark up so he could help me up and to the bathroom. We went to the bathroom sink where he unzipped my suit and pulled out my steel-caged cock. He put a towel around the sink and I slowly emptied my bladder, with piss splattering against the cock cage and spraying everywhere. A bit messy and awkward, but what could I do? After Mark cleaned up my mess I plopped into an office chair sitting upright, and actually had a couple decent hours of sleep!

Later on that day the lovely and wonderful MmeSuzanne (FetLife) showed up for a visit. I was immediately smitten by her; I had seen her wonderful domming work on SeriousImages.com and FetLife. Mark devised a plan to drag me out again, still in my cast, to a wonderful kinky cafe called Wicked Grounds for some fun with MmeSuzanne. He had called ahead to alert them of our arrival. Very cool folks there! We jammed into his small Honda car again and after a ten minute ride we ended up parking across the street from the Wicked Grounds cafe. I have some very fond memories of this same coffee establishment from past kinky bondage visits. Dalton helped me out of the car and attached a long strap to my casted forearms for MmeSuzanne to hold and she led me across the street while Mark videotaped this whole procession for the website. Not many people were out on this Sunday evening, but we surprised, amused and entertained the folks who were watching us from their cars at the stop light. Such fun, crazy stuff!! 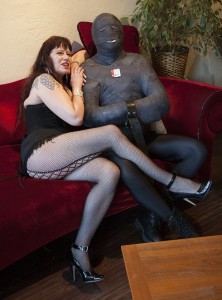 We entered the crowded cafe to the amusement of the patrons, ordered our coffee drinks, and found a table towards the back of the establishment for MmeSuzanne and I. Dalton had brought along some thick leather straps and proceeded to restrain me to the chair. It was hard to hear MmeSuzanne under the thick casting and through the earplugs which were jammed into my ears. While we chatted she occasionally gave me sips of coffee through a straw, or teased me by keeping the straw just out of my lips’ reach. I enjoyed her vivacious company immensely. After a while, we moved to the front of the cafe where we eventually wound up on a red sofa near the entrance. She sat sexily next to me with her nice stockinged and high-heeled leg draped across mine, causing my cock to throb in its cage. I could hardly see her because I was unable to turn my head. It was a fun scene. Eventually it was time to return to the SeriousBondage Institute, so she led me back across the street to the car, her sexy high-heels clicking the whole way. Such fun!

We returned to the Institute where I was helped out of the car and up the steps. Once we entered I saw a friend of mine strapped down to the same cot I had napped on earlier. He was in his new leather sleepsack and a nice padded leather isolation hood. This is a normal sight to be greeted with when visiting the Institute. MmeSuzanne and I chatted for a while and then I was hung up with straps and an overhead hoist next to my incapacitated friend on the cot. Due to the pressure inside the cast when I was winched off the floor, I could only be suspended for very brief periods. As a result, I stayed connected to the overhead hoist by the straps, with my feet remaining on the floor, while Mark shot some pictures and video. I again marveled at the total, complete tightness inside my cast, locked in absolute rigidity, enjoying every moment immensely. 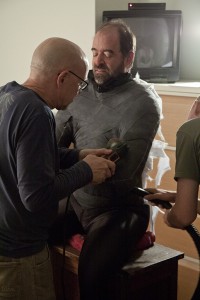 After happily standing put for a while, I was released and allowed to walk around and socialize. Dalton had to leave fairly soon, so it was time for me to be cut out of the cast – after nearly 12 hours! What an experience it was to have a saw cutting through the fiberglass encasing my body. The vibrations and the noise were incredible, especially around my head. The noise of the vibrating saw cutting through the 1/4 inch thick fiberglass during the removal was why Dalton had me wear the earplugs in the first place. All I felt against my skin (under my zentai suit) was some pressure and some heat produced by the friction of the saw. It was a long process. Another friend helped minimize the fiberglass dust and mess by trailing along behind the vibrating saw blade with a vacuum cleaner hose. Occasionally Dalton had to go over the cuts multiple times to cut all the way through the thick 1/4 inch cast. Without a special saw like this I would simply be stuck and screwed! Finally the cast was removed in multiple pieces and I began to regain my movement and freedom. Such an amazing experience. Thank you to Dalton, Mark, Mister-X, MmeSuzanne and the SeriousBondage Institute for this incredible casting experience! (click HERE for Part-1)  ~Mumman

Additional information about Mumman’s casting adventure can be found HERE.

For photos and a video of this scene visit SeriousImages.com. Also visit our all-male site SeriousMaleBondage.com.