By Rick Holte aka RankInSF

A roll of duct tape and standard mummy form doesn’t cut it for a serious mummification player like my buddy Rob aka “TapedAndTortured” on Recon.  The scenes he craves are not for the faint of heart or inexperienced.

To take his fetish to the next level he is constantly looking for new ways to be completely immobilized and tormented by various Dommes. These Dommes are ruthless in forcing him to endure the conditions that he himself has concocted.  That’s where I come in, he has shared his limits and fantasies in detail and knows that I will do my best to deliver the scene that will push him to the next level.

The scene starts with an image he found online of a guy taped to a chair that forces his legs to be spread open at a 90 degree angle.  As I sit in his playroom covered in rubber from head to toe and still stewing in sweat from the suspended crucifixion he subjected me to only a few minutes ago, Rob is already dragging his “interrogation” chair into position.  He climbs onto the chair wearing a latex surfsuit and boots, positioning his body with his legs spread open matching the angle of the seat.  As I grab a roll of shrink wrap and approach him he just says “Oh FUCK!”.  He knows this is it, no turning back, once the shrink wrap leaves the roll it’s ON. 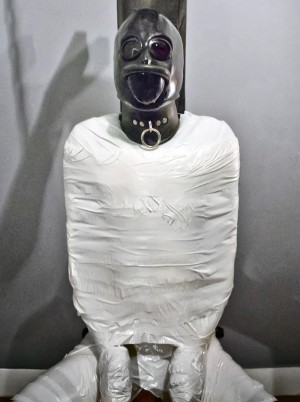 Starting at his feet I secure each of his limbs to the legs of the chair.  Everyone knows the saying “it isn’t bondage till you want out”.  That is why the shrink wrap is critical, not only does it protect his skin and the latex from the duct tape glue, it is the first stage of bondage.  Rob knows that the taping won’t be swift, I like to pay attention to details and make sure that movement is impossible and there is not a millimeter of flesh exposed.  His torment is that his anxiety will build with each strip of tape I pull from the roll and he will want to squirm his way out. However, he has no other choice than to sit there and accept that he will soon be encased from head to toe in layers of rubber plastic and tape.

The on-line image Rob showed me hadthe victim taped to the chair from ankle to hip with his hands taped to the sides of the chair behind him. As I finish his legs Rob moves his hands into place where they should go if I were following the details of the sample image.  I have something more in mind.  Rob loves corsets and having his torso constricted so I grab a wider roll of shrink wrap and start circling the chair cinching his waist down to half its normal size. After reaching his armpits I secure his shoulders to the back of the chair.  Rob is panting and fidgeting.  His eyes are bulging and he is almost catatonic so I check in with him and he assures me he is doing great and just focusing on his headspace so he doesn’t panic.  I nod and start applying tape to his torso one strip at a time, criss-crossing alternately one side at a time until his torso has disappeared.  As Rob lets out a huge sigh of 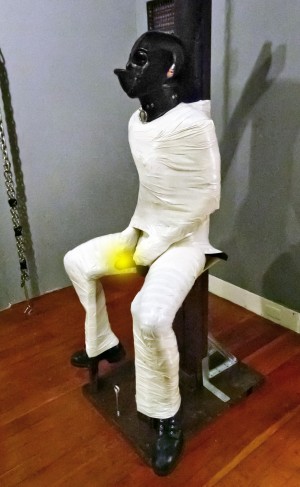 relief thinking I am done, I take advantage of his empty lungs to increase the tension around his waist with more duct tape so that his abdomen is restricted from expanding.

Now he asks me if I am planning to secure his hands. Of course.  I grab a pair of disposable exam gloves and turn them inside out with the fingers inside and slide each one over his clenched fists then wrap them in duct tape forming clubbed mitts. Working up his arms I position each arm at a slight bend and use a figure 8 pattern at the elbow to immobilize his arms in that position.  I notice that his exposed cock is rock hard and throbbing for attention so I decide to secure his clubbed hands just out of reach so that he is tormented knowing that he is inches away from relief.

I apply another layer of tape over his torso, encasing his arms so that his body is one solid unit of a duct tape shell.  He lowers his head to relax and try to see himself.  He is so distracted he doesn’t notice me approaching him with my Studio Gum urinal hood turned inside out.  As he opens his mouth to say “FUCK NO”! I shove the funnel gag in his mouth and in one smooth movement I turn the hood right side out over his face and cover his entire head in a layer of heavy molded rubber.  This bizarre hood has mirrored lenses that removes the last shred of human resemblance from his appearance.

I don’t want to get duct tape glue on my nice rubber hood so I apply more shrink wrap to protect the hood and secure his head to the back of the chair so he stops the futile attempts to shake it off in his panic.  That of course is followed by duct tape to immobilize his head even further and encase it in the rest of the white shell

that covers his body.  At this point the only thing un-taped are the lenses of the hood. If I could see his eyes I would probably be amused by the look of horror as I bring a bottle of piss (which he had collected earlier) up to the trough on the front of the hood.

Unable to move or protest I start pouring piss into the hood.  At first my victim gags a bit and coughs causing piss to spatter onto my own rubber gear.  The piss runs down my arm to my hand so I grab his exposed cock and start working it.  As the scene progresses I continue pumping his cock and pouring piss, but there is no movement just noise.  I can tell my victim wants out because the tape is squeaking and there are moans between gulps of piss.  Seconds later without warning my rubber catsuit is covered in cum that explodes from my victim’s exposed cock.

As I cut him free Rob explains that he didn’t expect me to go beyond the on-line image he showed me.  The intense encasement was a thrilling surprise for him and one that achieved the level of mummification he’s been seeking.  I love that he allows me to expand his limits. I also know that he can dish it out too, so I have some serious payback coming thenext time around!

To see Rank in action, visit SeriousMaleBondage.com. Also visit our companion website featuring both men and Women at SeriousImages.com.