Mummification 4 Me and U 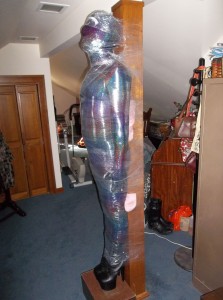 My favorite bondage friends came over Bondage4UandMe & Bondage4MeandU on FetLife. They were the first people to come over to our house for bondage play, and we’ve been over to their place too for bondage-mummification fun. A great, fun-loving, devoted, considerate super-kinky couple they are! He’s my bondage “Brother”. She and my wife get along great.

He had a great idea for a post mummification with his feet up off of the floor, inspired by a friend’s recent post mummification on FetLife. He got into his colorful zentai suit & high-heeled boots, duct-taped his mouth, put on an open-faced Neoprene hood, and we zipped the suit’s hood up. I stood him on an old speaker at the post and began TIGHTLY wrapping him to it, starting at the ankles, stretching out the pallet-wrap tautly as I went up. A folded towel was behind his knees and one behind his lower back for stress and posture considerations, and a small foam cushion was between his knees.

He occasionally moaned happily and in approval as I put the big pallet-wrap squeeze on him, as his wife watched. At the head and neck, I backed off the wrapping pressure considerably, asking him if it was OK as I went along. He was already quite high from the experience before the taping began!

He had brought heavy-duty Gorilla duct-tape, which I began applying tightly around his ankles. As I went up, the pressure on the boot lacing-hooks was painful on his shins, so I cut it a little, and didn’t fully cover the upper boots, as was planned. Around and around, up and up I went above his shins, making the thick tape tight and solid, running out near his waist. I found some nice red vinyl tape I had to use next, which applied very nicely. He was pleased too, as red and black is his favorite color combination. Solidly and tightly I applied it around his torso, then solidly and not very tightly around his neck and head, in strip and cut fashion. Much care needs to be taken in taping the head and neck. He mmmmm’d his happiness as I finished up with more strips, smoothing them down. He was in rigid, immobilized mummification nirvana, an anonymous, fully-covered vision in red and black.

Now it was time to remove his stand and leave him hanging! I shoved it out from his heels, and was very pleased to see no slippage occur on the post. He murmured his happiness. I got the red tape and tightly taped his boot heels to the post so he was COMPLETELY stuck and immobilized. Picture time and wifey play-time!! : )) She began sensuously rubbing and squeezing him from head-to-thighs, getting him all hot and bothered. She even grabbed his shoulders and shook him back-and-forth, as he moaned. They both enjoyed it immensely. I took a video, which he posted on FetLife, that quickly went Kinky & Popular! 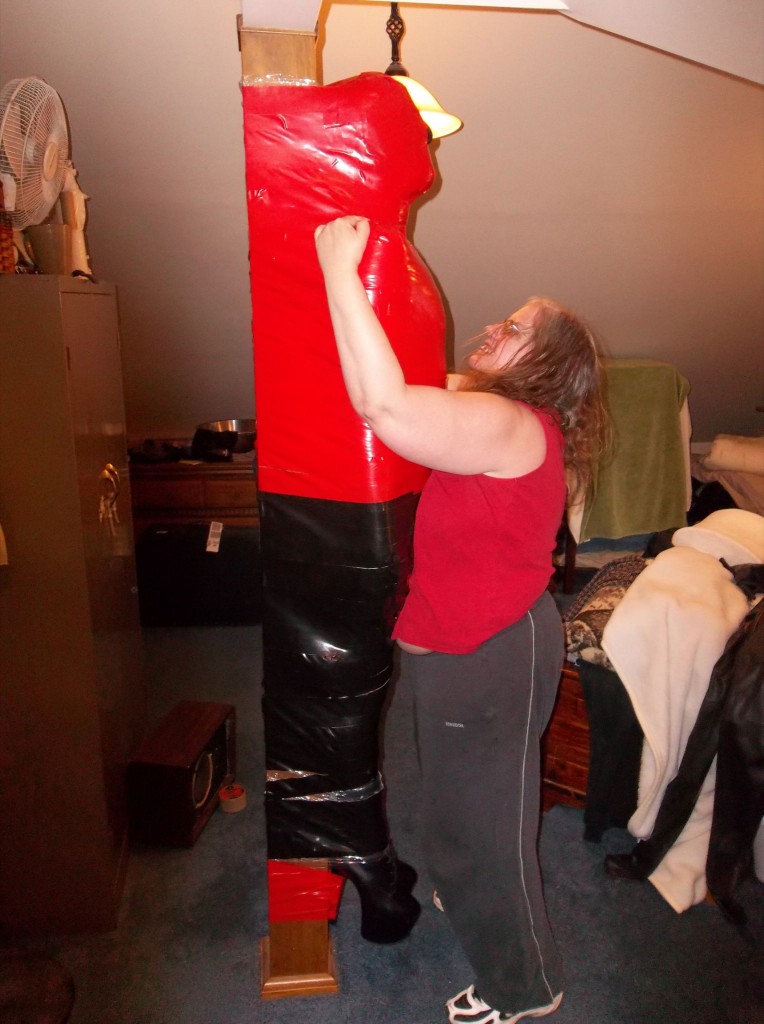 He endured, the only real discomforts being his extended booted and taped feet, the lacing hooks pressing into his skin, and the pressure between his knees. I had placed a small yellow foam pad there between his knees. Something thicker next time! And no boots next time, he said afterward, confident that he could go at least 4 hours like that! From his knees up, he was very comfortable. And very rigidly immobilized, and loving it. He wanted to stay there for hours, but the pain in his feet, shins and knees became too much, and it was cut-out time. I cut the tape around his heels and he moaned in pain and relief. I got some books to place under his feet, as the speaker wouldn’t slide back under them. Then I began cutting the tape and plastic from his head on down. I could see him smiling under the zentai hood. I cut the tight layer of plastic and tape off, leaving him supported by the tight under-layer of plastic-wrap from his chest to his ankles. After about 2 hours, he was a worn-out, sweaty, happy mess, and he needed the support to not fall forward!

His wife grabbed him as I cut the plastic off that had held him so tightly to the post, and he fell into her arms. He felt ecstatic and shook my hand with vigor. Then he got his suit and tape-gag and hood off and got changed. He was beaming and feeling high. It was time to celebrate with a beer and go out back by the stream. In the coming hours of the magical night of the Supermoon, he shook my hand hard over and over, in post post-mummification ecstacy. Our other plans for the evening could wait for another time. What we had done was enough, and he needed to just relax in the after-glow, and the bright moon-glow. He remarked over and over about what a great experience it was, and how high and great he felt. I told him, “You’re welcome, Brother! My pleasure!” It carried over to the next morning, when they left, and even for the next few days, he told me! To be able to give someone an experience like that, and the lingering high and giddiness resulting from it, is a great and gratifying thing to be able to do. And, he’ll certainly be returning the favor!  -MumMan