This past April I was invited by the wonderful Snoflak to do a mummification demo/tutorial in Kingston N.Y. with my bondage and mummification brother Bondage4MeAndU. My brother and I  had met over 2 years prior via FetLife when he came over to my house in central NY and I pallet-wrapped him tightly to a post in my bedroom. He absolutely LOVED it and became hooked on mummification. We took turns doing-up each other in mummification wraps and had a blast. His wife got in on the action too, as did mine, once or twice.

For this mummification demo we put padding up on an iron support beam in the meeting hall where the demo was to take place, and Bondage4MeAndU got into his shiny red zentai suit. A nice enthusiastic little crowd was there to watch. I began by wrapping his feet & ankles in a somewhat loose fashion with 5″ pallet-wrap, then taping them around, not too tightly, as he was about to 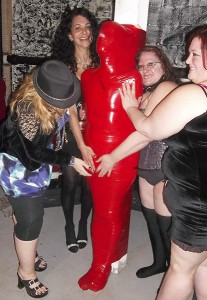 be putting his weight on them. I helped him hop to the post where he would soon become a completely wrapped, taped & immobilized red mummy-statue. He was a very excited boy to be put on display like this, totally objectified as an inanimate object to be admired and played with while excitedly simmering underneath.

I wrapped his legs and torso to the post, then individually wrapped his arms and hands as is proper in a mummification experience, to aid in tightness and inescapability. I then tightly wrapped him in overlapping fashion to the iron post with his arms at his sides and a small cushion between his knees. I explained to the folks the steps in this process, like having him hale as I wrapped and taped across his upper abdomen and chest. This expanded his chest cavity so the wrap wouldn’t be too tight to impair his breathing. Then, the delicate part of wrapping his neck and head at a comfortable, not too tight pressure. I joked about the need to breathe being overrated. I explained to the audience the vital importance of communicating with your mummy wrapee, constantly ensuring there isn’t any discomfort or pressure-points that would present problems and cut short the session. My brother and I both enjoy long sessions however each mummification experience is different. Different issues can develop, like with the feet, knees, hands, wrists, back, and on up to the head and neck. Someone is putting their life in your hands so great care and precaution must be taken. 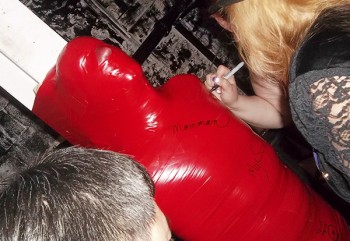 I then sealed him in with 2″ vinyl tape as I answered more questions from the inquisitive group. From the ankles up, I carefully applied the red tape with firm, but not excessively tight tension. Wrapping too tight leads to a short endurance time and likely circulatory/nerve issues. We have done this a lot with each other, and have a good feel about it, knowing our tolerances and how we like it. Solidly, carefully and overlapping, I went up his body to his shoulders while having nice exchanges with the very interested audience. Smoothness and aesthetics count. It was a fun atmosphere.

Then came the delicate taping-over of his head and neck, lots of it in individual strips of tape carefully applied so as to have the right, not-too-tight tension. He had no gag in so he could communicate, but I taped over his mouth quite effectively. Through our mutual experience, and just being sensibly careful, we are able to give each other best “right-tight” experience possible. I’ve done mummifications for other friends too, trying to give them the optimal experience. I relate to them via my vast number of mummification sessions I’ve personally enjoyed over the past 25+ years at home. It’s a great reciprocating thing. “Do unto others…” Those of us who seek a mummification experience want to be totally, safely immobilized and “hang out” for lengthy periods in a helpless and self-contained encapsulation. We like to have the initial excitement become a great relaxing “sub-space” experience, with the energy cycles and nuances that only total mummification bondage brings us. For me and my mummy friends, being denied sexual stimulation is part of the overall complete denial of physical functioning, being tightly sealed away and 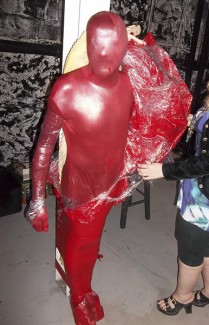 isolated, with that sexual energy left simmering and unfulfilled. You are left with no release except what which you can achieve by going inward, into your mind and the altered mental states engendered by the shear overwhelming, overpowering force of complete immobilization, physical nullification and sensory-deprivation.

Finally, after much sweating on my part, Bondage4MeAndU was a completely immobilized effigy in solid red, ready for close inspection. (mummifying can be hard work!) The ladies especially were most curious and touchy-feely. It became a hot scene, though he was completely covered-up. To add to his bondage and helpless predicament he was wearing a tight plastic chastity device, and a diaper, in case he was mummified for a lengthy time, as he had hoped. His wife was beaming and we began signing and decorating the red mummy-statue with a Sharpie marker. Women’s hands roamed freely over his body –  and of the ladies were getting turned-on by the experience. Fun was had by all and many pictures were taken.

After a little while, Bondage4MeAndU began to experience signs that his mummification scene would not be for as long as he desired. He was able to communicate to me about the soreness of his inner ankle bones pressed against each other, despite our trying to be careful about that. So I cut in between his toes and feet to alleviate the pressure. Then, it was pressure on his left wrist with the red tape. (I like to use socks on my hands and arms for padding and sheathing, whereas he eschews that) So I cut behind his wrist to lessen the tightness there. But it soon became apparent, within about an hour, that he was nearing the end of his endurance. It was now ‘cutting-out time’, which is always a great relief after a mummification which you trying to endure for as long as possible. After all of our combined knowledge and experience together, our mummification proficiency and expertise, his desired 3-hour experience was only for about 1 hour. We continue to learn from each mummification session we do.

However, that said, our audience loved it, and our host Snoflak couldn’t wait to get me mummified so she could tease, excite, torment and torture me. What a wonderful experience we all had!  ~Mumman