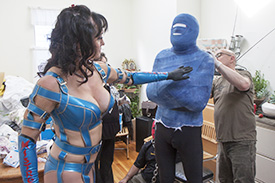 So, after a great party the night before the Folsom Fair, it was casting time the following morning. I had a Mature Metal chastity device locked on, which Mistress Miranda would attach a leash to and lead me around the fair. This was a most exciting prospect.

I put on my full black zentai suit with holes for my mouth and eyes, earplugs, with tube-socks to encase my hands and arms, and 3 1/2″ platform laced and buckled boots. The boxes of under-wrap padding and fiberglass casting supplies were on the table, ready for Dalton to expertly apply. We decided on a simple arms-crossed position, which worked out great. From waist to shoulders to neck and arms he wrapped me snugly in the synthetic cotton under-wrap as friends watched. I crossed my arms comfortably and he began tightly rolling on the moistened rolls of fiberglass casting material, smoothing/rubbing it down for the chemical bonding reaction to take place, moving from my waist up my torso.

It is a wonderful feeling, being slowly enveloped and mummified in tight layers of hardening fiberglass material, becoming more and more immobilized by the minute. Layer upon layer was applied and rubbed-down, and a nice warmth felt within. From my waist, up over my arms, he went with the layers of blue casting material, so I’d match Mistress M’s stunning blue strappy outfit. Color coordination was very important to her. Around and around, up and over my shoulders he went as I remained as still as possible, loving the totality of the tightness and solid rigidity. Then he wrapped my neck and head thoroughly with the soft cotton under-padding, and proceeded to overlap the fiberglass casting material with a nice, firm, but not too tight pressure, over my face and head, leaving a gap for my mouth and eyes. Then he rubbed it down for the full bonding effect.

up in wonderful, thick, tight fiberglass layers with only my mouth and eyes barely visible. Mistress Miranda watched approvingly as I became a vision in rock-hard solid blue. A friend trimmed the cotton under-wrapping at my mouth and eyes and Dalton stuck a pair of sunglasses on my solid cast face. Mistress Miranda drew some lettering on my chest and back, “MISS MIRANDA” on the front, and “THE BONDAGE MISTRESS UK” on the back with a broad Sharpie marker, and I was truly hers. I could not move one little bit in this thick, heavy cast. I looked awesome! It was so perfect! Dalton had done it again! The ‘master caster’. He has learned my tolerances and knows how tightly I like to be wrapped. After completing my cast, Dalton did a red fiberglass head-cast on my friend ‘ReallyTwistedPup’ (on FetLife) and included a heavy attachment ring on top! Then TwistedPup got strapped into a heavy canvas Maxcita “Psycho” straitjacket, was he ready to go to the Fair as well.

We went out to the corner and hailed a taxi, and the driver was quite amused. I was angled into the backseat with quite a little effort, then joined by Mistress Miranda. What an exciting taxi ride! At our destination I was extracted from the taxi and we were on our way into the Fair. Mistress Miranda clipped a leash onto my cock-cage and proceeded to lead me down the street. I was so excited! Immediately people began to take notice, and take pictures. And more people, and more pictures… It went on and on, with some people getting in the pictures with us. It was wild. It was a blast! I was smiling (which was usually hard to tell) and Mistress Miranda was beaming and posing, occasionally turning me around for people to see her writing on my back. We were a HUGE hit. 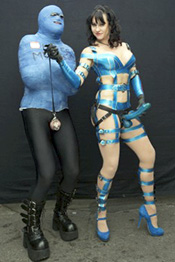 People loved this interesting fetish duo, in near-matching blue casting and sexy strappy outfit and heels, with my Mature Metal caged cock device at the end of her leash, with her big blue strap-on dildo hanging out. We stopped over and over for picture takers. Dalton was with us carrying bottled water with a straw for me, and the cast-cutting saw as a precautionary measure in case I had emergency problems. I had to take two rest breaks as I was getting a little sweaty and tired. Every so often I tried to move inside the tight cast to feel the restriction and revel in the total immobility. I guess a couple thousand pictures were taken of us. We met friends along the way and got photos with them as well. My peripheral vision was quite limited, so I had to rely on the guidance of Mistress’ leash and (usually) gentle tugs on my cock-leash. It was such fun and exhilaration!

We went to the official Folsom Fair photo booth and got photographed by the great Howard Schatz. I couldn’t sign the consent form though, so the woman stuck a pen in my mouth and I did an illegible scribble on the form. Howard took great shots of us, as seen in the photo directly above. After more walking around and visiting at booths, stopping for photos regularly, we made our way over through the crowds to the Wicked Grounds kinky cafe for coffee. I had some coffee through a straw, sitting straight upright in the chair with the lovely Mistress Miranda right across from me to gaze at. I had to turn my whole body to see anything else. People at the cafe took us in good stride and humor.

We finally left he cafe, so she hooked me back up to her leash. After a while we decided to get a taxi and head back to the Institute, although I still had plenty of energy for more walking around and milling about. Dalton hailed a taxi on the busy, crowded street outside of the Fair, with Mistress still holding the leash on my exposed caged cock and balls! This naturally drew some attention by shocked motorists and pedestrians. A taxi pulled over for us and the driver opened the passenger door. Upon seeing my cock still exposed, he abruptly said “No ride”, slammed the door and took off! So, it was cover-up time for my cock and loose the leash! The next taxi, no problem.

It was a long, slow ride back to the Institute with me jammed into the back seat with Mistress Miranda, with heavy traffic congestion. As rigid and awkward as I was, I could only see the fabric of the taxi’s ceiling during the entire ride. The front of the cast began digging in to my groin area, but no adjustment was possible, so I just had to endure it for the duration of the ride. It was one of those “hurts so good” situations. Finally we were back at the Institute, and with pushing and shoving I was extricated from the cab. In we went, a happy, tired bunch. I decided to lay on a bed to relax for a while and nearly dozed off a few times. I was in bliss. I thought I could stay in the wonderful cast all night, but Dalton had to leave, and he is the master caster man, from start to finish. I was helped up off the bed and out onto the back deck.

He started cutting with the vibrating saw at my head, and I 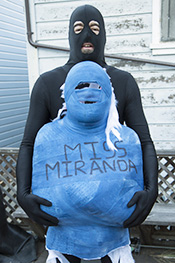 was glad I had the earplugs in. It was sooo LOUD! What a feeling! The vibrations awere incredible! He proceeded to cut into the thick solid layers slowly around my head and down my neck and shoulders and sides. The vibrating saw is quite safe to the skin, but being cut out of a cast is always quite an experience. Dalton had to go back over many areas to get the full cut-through. I felt sad to get out after “only” 8 1/2 hours or so, but he cut it in 2 neat halves so that it is reusable and can be taped back on, or have latches or Velcro put on it for re-use. After cutting with the saw he pried the back off, then lifted off the front piece, and I was free from its wonderful embrace. The cast-cutting saw is so safe, it didn’t even put a nick in my zentai suit!

I gave Dalton a hug and high-five for all his efforts, and Mark took pics of me with the cast. It was a truly incredible day, and I’m glad we did our part to help make the Folsom Fair a more fun, interesting, memorable day for other folks! Thank-you again, SeriousBondage.com and Mistress Miranda! ~Mumman