ModeNarr was back from a business trip and anxious for mummification bondage at the SeriousBondage Institute. He wanted something out of the ordinary and we bandied about various ideas. What he decided upon was certainly out of the ordinary and a bit daunting. So we went into the playroom and got started. Stage one was getting a length of steel Unistrut with two heavy suspension rings bolted on. I attached to his back, along his spine, with a pad underneath, wrapping layers of 5″ pallet-wrap and duct-tape tightly around him and the Unistrut bar. Next, he had to kneel down for me to hook up the overhead winch cables to the rings on the bar. I pallet-wrapped his legs in a bent position, to be thoroughly taped over later with duct tape. This was a tedious task in itself, also wrapping his feet, with him in a kneeling position on the floor. As you will see in the video, I had begun to work up a sweat! 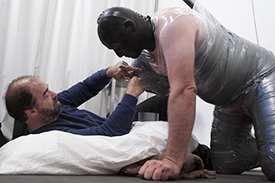 ModeNarr had brought with him a marvelous tight and thick latex anatomical hood which I laced snugly on him, with only nostril breathing holes. Soon, as I got more of him wrapped-up, he was sweating too. In cast you don’t know, mummification play is sweaty, hot business. My goal was to get him all pallet-wrapped and duct-taped as quickly as possible so he would hopefully have a while to enjoy his mummification and suspension experience. As I plastic-wrapped his bent arms, upper-chest and shoulders, and then began the duct-taping wrapping-covering process. This takes a while when covering bent, separate body parts. I was sweating my ass off from trying to be as speedy as possible, tearing and smoothing down the thin silver duct tape. I guess part of the problem was that I was wearing my blue sweater, but I didn’t want to stop and change into a shirt because it would distract from the process.

At last ModeNarr was sufficiently wrapped and taped to do a partial suspension so I turned the crank of the front winch just enough so he was up on his knees. This allowed me to more easily reach all the spots underneath his torso to get the full duct-tape coverage. He was doing very well by this point, which was very encouraging. Finally, I could get him leveled out and get him cranked up off the floor. Yay! I had lightly wrapped the pallet-wrap around his head and the bar to support his head comfortably, covering his face but for his nose. I hurriedly applied more duct-tape strips tightly across his back and sides to reinforce the body torso support, which was already stretching and sagging a bit. ModeNarr is a big guy so a lot of weight is involved in suspending him off of the floor. 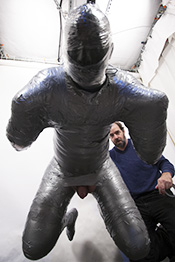 Using both the front and rear winch I cranked him up higher and applied more and more strips to cover all the pallet-wrap that was still showing in spots. I asked him how he was doing regularly, and things so far were good. I cranked him up higher off the floor, fastidiously covering with additional layers of duct-tape where needed, sometimes for smoother aesthetic effect. He began periodically flapping his trapped arms like a bird and was having a lot of fun. He was a mummy-gimp in paradise. He flailed his legs and arms vigorously, making me apply more reinforcing support strips of tape. I cranked him up even more, and got him at an angle so his head could be higher than the rest of his body. I was ecstatic that this mummification was working so well and he was enjoying it so much! 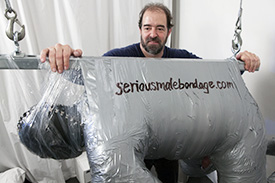 My hair was a sweaty mess, and I asked the photographer where the Serious Bondage hair and make-up person was but I was told that it wasn’t in the budget this time.  :-)  My suspended mummy-gimp had enjoyed himself for a long time before tiring and getting numbness in one hand. I was pleased that he lasted for so long, something like 2+ hours! I finally lowered him down to cut him out by sections, beginning with the legs. He was sweaty, high and happy. Afterwords, we watched the video that had been shot before going out to dinner and have a toast to a happy, successful evening. He said it was his best bondage experience ever! I was amazed and felt very proud and honored to hear that. So, it was a great, successful, unique mummification scene which  left us feeling very good. ModeNarr was already looking forward to his next suspended mummification experience, which I had already decided upon. But that’s for my next article!  ~Mumman

For a video of this mummification scene please visit SeriousMaleBondage.com. Also visit our companion website featuring both men and women at SeriousImages.com.