The amazing feeling of having your head encased in hardening plaster is not easy to describe. It’s not for the feint of heart or for one that can’t take closed spaces. You see, for at least an hour, you won’t be able to move, see, or speak as the casting material is applied and allowed to harden.

I recently had my head sealed inside a hard shell to make a custom-fit mold. The idea was for the cast to later be filled with concrete to make an exact copy of my cranial anatomy, so that a custom locking metal head cage could be fabricated over that. Then the metal cage would be locked on for scenes and events, overnight sessions, or just to keep me quiet. But one step at a time here; first we need a mold.

To prevent my thrashing around, the fine folks at SeriousMaleBondage taped me in a partial mummy rig. Most everything from the waist up to my neck was secured as shown here, hands down to the sides, so that movement was restricted, at best.

To keep the encasement from sticking to my hair, face, and neck, some hair conditioner and petroleum jelly was smeared all over yours truly’s noggin. (Later, that layer proved to be not easy to totally remove, and the conditioner’s coconut smell lingered well into the next day. That’s when I wondered if a clear thin plastic wrap would not have worked as well, but the smeary stuff had been the method of choice that day.)

Then they got to work. The sheets of medical plaster were dipped in water, then applied and held against my head to start their initial hardening. As more and more strips went on, the “helmet” began to take shape, and bit by bit, I lost contact with the outside world.

Soon I could see nothing but light coming through a white haze. Sounds in the room became a bit muffled. I could not move my jaw, as the plaster had hardened under my chin, keeping me quiet. Breathing was done through a small opening just under my nose, and as the entire structure became a hard shell, I realized I was in this for the long haul. There was no way I could get out of this until the folks decided it was time to let me out.

The time in the enclosure was amazing. The outside world just didn’t matter for a while. This was a great time to go to that “special place” and just enjoy. Those of us who also have locking leather hoods or other sensory-deprivation devices will understand. 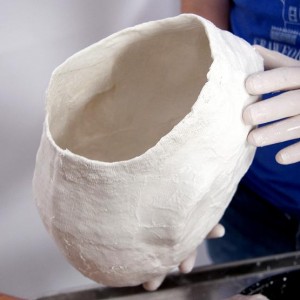 A while after all of the strips were applied, maybe half an hour to 45 minutes, the plaster was suitably cured and it was time to let me out. The special cast saw was carefully used to remove the new mold; a cut was made from the nape of my neck, just high enough to the crown to pull the new form open and let me out.

After the cast was off, It took me a couple of minutes to readjust to the room light, and I looked like a wet rat. But the job was done; we had a mold.

I enjoyed the casting session, and I should say that I wish it had been left on longer… maybe even overnight. There’s just an incredible feeling of being totally encased and not in control… and that is why we do these things, right?

As of this writing, the metal head cage has not yet been made. But when it’s finished and locked on me, we’ll do Part Two of this story, and I’ll let you know the feeling of being secured in a personal metal prison. And I can’t wait for that to happen.  ~Chuck

A video of Chuck’s head casting experience can be found on SeriousMaleBondage.com. Visit our website featuring both men and women at SeriousImages.com.