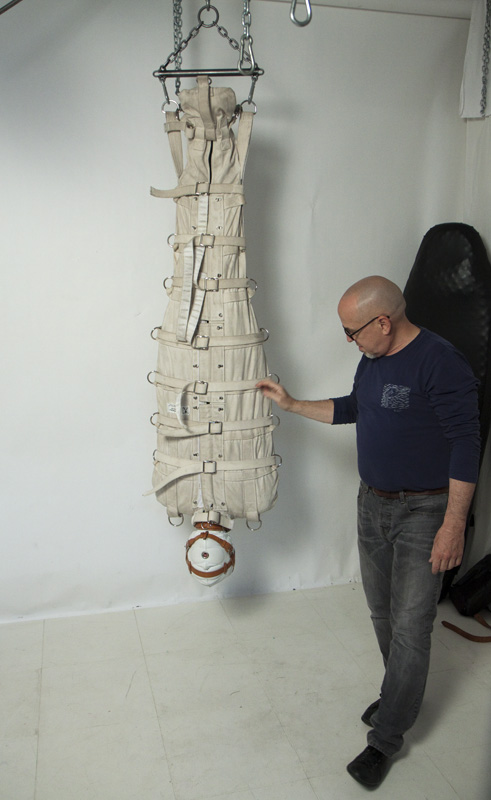 I have been into bondage for my entire life. As a small child, I often had intense fantasies of being encased in a block of glue, or in a glass mold fitted perfectly to my body. I always sought the sort of bondage that gives you that sense of perfect inescapability. Where there is no room to move, much less get away.

Even before the day in question here, I had a calling. A spiritual calling, if you will. I had a sense that it was time to get my serious kink on, so I emailed my favorite pro Domme, and my friends over at the Serious Bondage Institute (SBI), and set up a day that I could come to San Francisco and see each of them. My first stop, SBI.

Dalton is always very accommodating of my obvious desire to be trussed up in the most inescapable ways, so he was all business within five minutes. There was this canvass sleep sack that he wanted to test out, so I happily agreed to oblige him. I selected the hood myself – I wanted complete, total enclosure.

In short order, Dalton has me completely strapped into the sleep sack. There are internal arm-sleeves, as one should expect, a heavy zipper, and straps that go all up and down the body. Once I was in, there was no getting out.

Then came the suspension, adding a whole new dimension to my feelings of helplessness. I had never been suspended before, so this was a completely new experience for me. First he used a winch to suspend me by the shoulders, and I just swayed lightly, like a pendulum. Already I was falling into sub-space. But there was more to this scene. Dalton wanted to suspend me upside down, so he attached a second winch to my feet and pulled them up above my head. Finally, he let my head down, disconnected the winch, and my suspension was a perfect inversion. 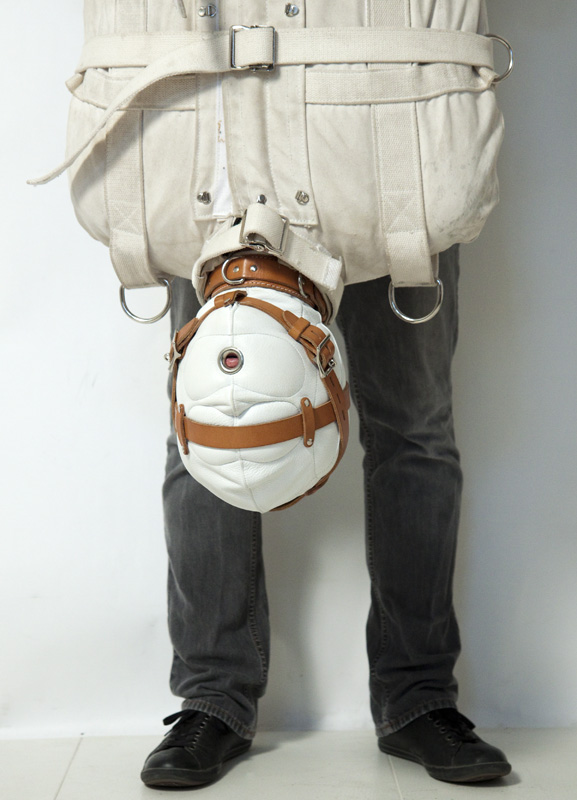 This is when my experience became truly spiritual in nature. Blind, sensory deprived, disoriented, and barely able to move at all, I became keenly aware of my own mind. I watched how it struggled, just out of habit. I couldn’t even tell you what I was struggling against, just that I was in a state of struggle. But within just a few moments of my seeing all that struggle going on, it slowed down, and finally evaporated. It was as if the fact that I COULD NOT struggle physically forced my mental struggles to quiet down, as well. A few moments later, all struggle and inner conflict was gone. All that was left was clarity. Insight. A clear understanding of something whose obfuscation had been causing me no end of useless drama. And it wasn’t just seeing the truth by itself that was so profound for me; it was knowing that this was the truth that was left AFTER all struggle had disappeared. This was what MUST be true, for truth is what becomes obvious once you stop fighting against it. And once seen, there was nothing I could do but to keep surrendering to it.

This is what is so therapeutic and even spiritual about bondage for me. It forces you to surrender, when your background habits are all screaming at you to fight! Who cares what you’re fighting or why, just don’t give up. You must fight to live another day – Except that such struggle is exhausting, and 99% of the time, it is completely unnecessary. Mummification is an amazing way to take some time to intentionally step out of all that mental and emotional confusion, and simply surrender to the reality that you are not going anywhere. To surrender to what IS.

I told Dalton that what he had done to me was like therapy. In the right context, he could charge at least $150 per hour for this kind of service. Fortunately, that’s not his gig. He just likes to take pictures. Later that day, I shared these experiences with my Domme, which delighted Her to hear. But that’s a story for another day. ~SurrenderSpirit

For a video of this inversion scene and other unique bondage scenarios, please visit SeriousImages.com and SeriousMaleBondage.com.