Firm hands that silently communicated years of bondage experience reached out and grabbed my shoulders to guide me into just the right position. Their natural authority commanding me to remain still as my restrained, leather-gloved hands dangled helplessly chained above my head.  I took a few short steps to comply, and I then felt a nudge from his foot against the inside of my leg instructing me to spread my booted legs wider. This would then give him better access to be able to freely and skillfully wrap them up using one of the many rolls of colored tape I was told to purchase for this mummification encounter of the Serious Male Bondage kind. As I quietly stood, straining to see what was happening to me through the rubber hood, my ears were suddenly greeted with that familiar sound of tape being pulled from the roll.

A few weeks prior to this evening, I wasn’t sure what to initially think when I saw the words typed to me during an IM session with Mummy Ed, “I want to wrap you up and mummify you”. At first I thought to myself this isn’t the kind of bondage I usually fantasize about, and this offer had come about after having a long term back and forth communication about doing a different scene that had never materialized due to many time and schedule conflicts. This scene was also to be a precursor for the one to come that we had finally been able to organize and plan after several failed attempts. After quickly pondering this proposition and armed with the knowledge that Mummification is near and dear to his heart, I quickly said yes knowing that if this were to ever happen and become a reality, I couldn’t be in better, more experienced and trusting hands.  After saying yes, I quickly realized how intriguing the premise would be and that having an open mind to such new and different things opens doors to new worlds. Doors I wanted to kick down with all my perverted might and jump into that new world with eyes wide open and a heart and mind filled with excitement for what a future that included regular bondage adventures might hold.

As I continued to stand, I started to really feel the restrictive effect the layers of tape had. Ed had already wrapped me in a first layer of plastic wrap, so the tape wouldn’t ruin my leather chaps and rubber surf suit. As that first layer of tape was applied, it had a somewhat calming affect in the sense that for some reason, it just felt right to me. Despite the fact that I had never been wrapped up in that manner before, my body seemed to respond in a way I thought it might. As this process unfolded, I started to feel 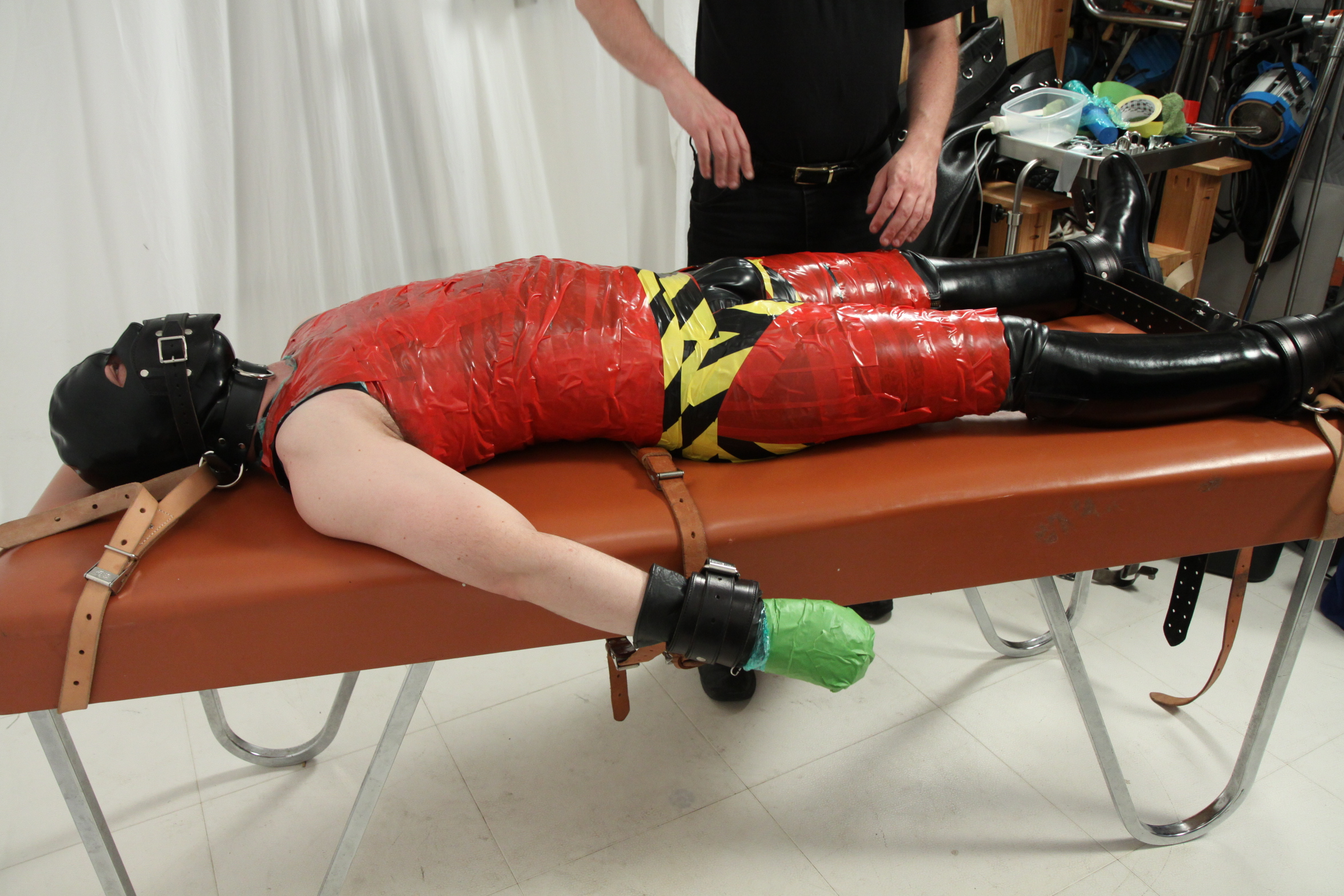 very relaxed as my mind wandered to anticipate what the end result would bring to me physically and emotionally.

After another twenty minutes or so, Ed had pretty much covered most of my body in bright red tape and we were ready for the next phase. He shuffled me over to the side of a large, vintage style massage type table and told be to get on it. I struggled to get myself up as the tape was starting to show it’s full bondage affect. I managed to lie down and he pushed me over a bit to get my in a good position for the next part of restraining my hands and ankles.  With the assistance of Dalton and his entertaining, twisted wit, they set about making sure I couldn’t move my hands and feet, and that I wouldn’t be able to reach up and touch my rubber codpiece, which was helplessly exposed through my mummified, taped up body. At this point I decided to try and have a little fun and demonstrate the fact that I could still move my now taped up hands over to my crotch. I claimed, through a muffled gagged voice, that this wasn’t very serious bondage because I could still move my hands a little bit.  Doubts started to creep into my head that maybe this scene wasn’t going to live up to the serious bondage I was familiar with as clearly demonstrated time and time again on their website.  All doubts were quickly erased as my little challenge was answered with the sensation of my hands being strapped down tighter and being told, “Go ahead, try again to touch yourself”. I tried and my hands were not going anywhere.  At that point, I knew this was getting serious…and fun.

While I struggled in vain, I could hear the two of them trying to make a final choice on what Ed was going to use to tape me to the table.  I then heard Dalton say, “We could use this.” I didn’t have to see it, but I could hear the smile on Ed’s face as he delightfully approved Dalton’s choice. All of a sudden, I felt a sensation that was clearly not tape binding me to the table. It turns out it was a wide, black roll of heavy plastic wrap, used to most likely wrap up large items for shipping and or storing purposes.  Within a few 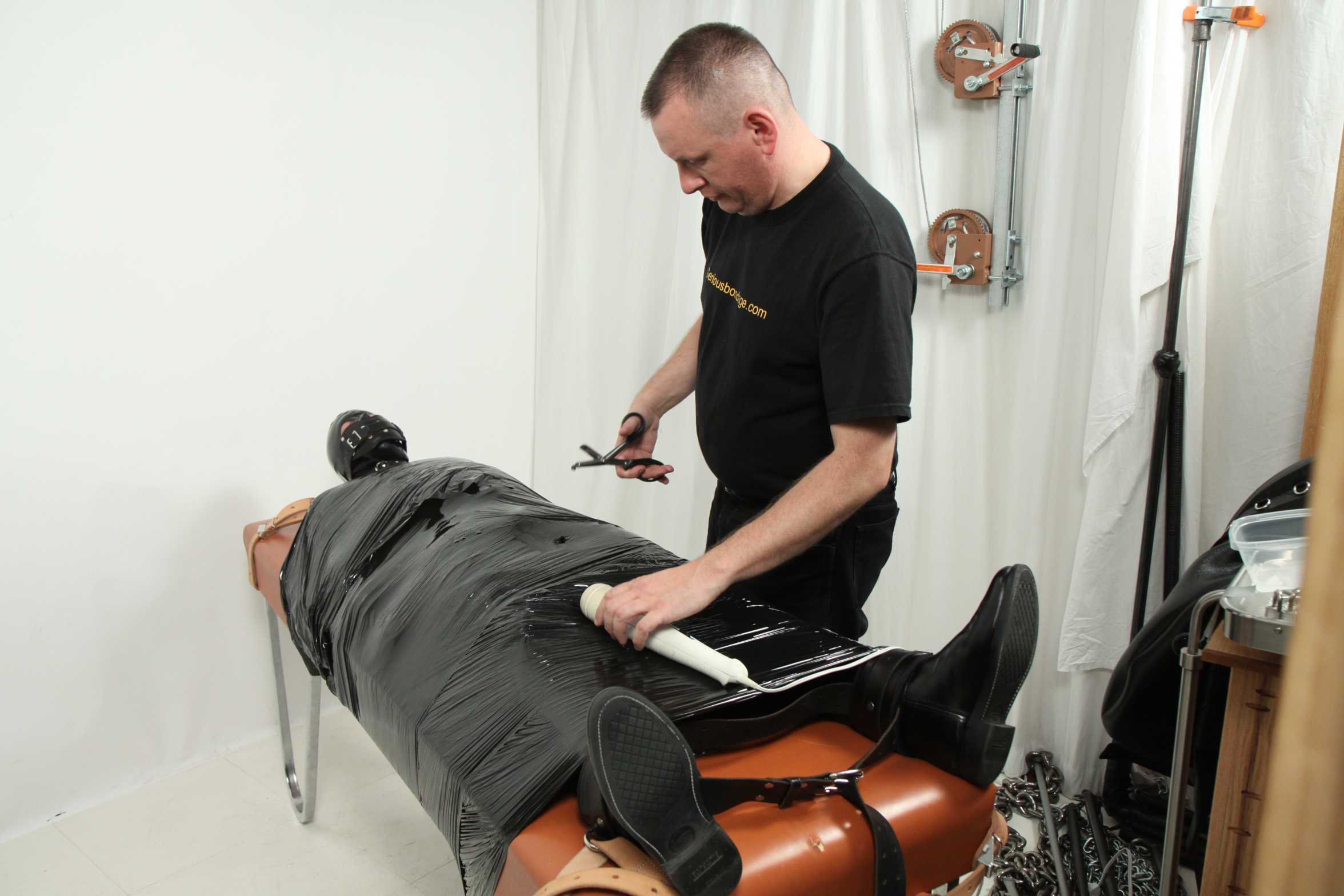 minutes, to the sounds of devilish laughter and the sound of a large roll of industrial plastic wrap being unwound, I found myself completely immobilized and mummified to the table. I was not going anywhere. I was bound so tight I couldn’t even struggle to try and test how tight I was wrapped and if I had a remote chance of getting out. At that point, I then knew what my mind was anticipating earlier in the night; this end result of what it would feel like of being completely helpless, in total bondage. It just felt so right.  ~Bondage Rider

For photos and vides of these scenes please visit SeriousImages.com and SeriousMaleBondage.com.