An Experience to Remember

San Francisco was my final pit-stop before returning to my home Down Under. While there, I had an opportunity to visit the infamous ‘Serious Bondage Institute’ (SBI), and I must tell you I was not disappointed.

I had not visited San Francisco before and was a bit disoriented when I arrived at the airport. I soon found out that I needed to take a shuttle bus to my hotel and it was from there that I called MummyEd who was expecting my arrival.

MummyEd was a nice man with a warm personality and a great smile. We quickly got to talking before taking a brief tour through San Francisco on our way to meet the other guys at the SBI.

When I walked through the door I saw a whole range of bondage equipment and devices, and was immediately glad I had made the trip. I met Dalton and Mark who were busy on their computers processing photos and videos. We talked for a few minutes and I told them about my interest in Humane Restraint institutional restraint gear. Before I knew it, I was strapped into a Maxcita straitjacket which was quite restrictive and thoroughly enjoyable. It had a lot of buckles and the canvas was very thick and heavy. I must admit I was getting turned on. So here I was in this straitjacket, having a casual conversation with the guys while MummyEd was showing me around their office, play space and gear room. As it turned out, they needed help with their computers and MummyEd had to leave for work, so they pulled me out of the straitjacket and I dove into their networking problems with the agreement that we would play with bondage gear the following day. After a few hours of work on their computers I went back to my hotel for the night.

MummyEd works the night shift, so the next morning after he got off of work, he came to my hotel room and put me in the same straitjacket, but this time he added a canvas Maxcita hood with a zippered mouth and open eyes. I stayed in the gear for a couple of hours while he caught up on some sleep. I guess this gear was just a warm-up to what my next experience in bondage would be…

Back at SBI, I didn’t quite know what to expect because my previous experiences with professional dominatrices had been somewhat disappointing. I had always wanted to be really restrained and basically unable to move. My desire was to be restrained with medical institutional restraints because this has always been a fantasy of mine. I wanted to feel the leather on my skin and be completely trapped. The paid dominatrices never had quite enough gear or experience to satisfy my desires. 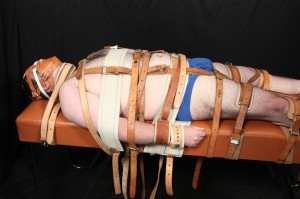 MummyEd and I took a look at some of their equipment and I saw a tan leather muzzle. I had to try it. There’s nothing like being totally restrained and also having your head totally restrained too. The muzzle had lots of buckles and straps and Dalton fastened it securely to my head and also secured the collar which was attached to the muzzle. I was already in heaven. The feel of the muzzle was unlike any I had experienced before. It was snug around my head and my mouth, and the addition of the collar was certainly well thought out.

While Dalton secured the first set of Humane Restraints to a padded table I stripped down to my underwear (being a little shy). The first restraints on the table were the wrist and ankle restraints which were attached to thick canvas straps and a thick collar restraint. They looked wonderful and very ‘institutional.’

I lay on the table and had the wrist and ankle restraints applied and the collar restraint locked around my neck. It was wonderful. I felt like a psychotic psychiatric patient that had to be restrained for his own protection. It was amazing. The restraints barely moved and were quite thick and strong. I enjoyed struggling against them.

Then they placed a matching leather blindfold over my eyes which made me feel even more helpless; not being able to see what was going on. To my surprise the SBI guys hadn’t finished. More leather restraints and straps were attached to me including straps across my chest and mid section, straps around my legs, knees and thighs and a few more straps around my arms and wrists. It was very difficult to move. I struggled a lot but was firmly held down by the restraints. Needless to say this was extremely exciting and pleasurable. More straps were used to join together other straps which made it feel a lot tighter still. I struggled more against the restraints but I wasn’t going anywhere. The creaking noise the leather made as I struggled was a highlight of the scene and added a lot to my experience. However, there was more to come… 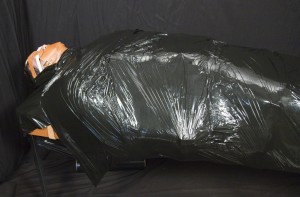 It was then decided to further restrict my movement by wrapping me with plastic wrap. They started at my feet and continued to cocoon me all the way up to my head, leaving room for my nose. Now I was really stuck. I could only move my head slightly and the muzzle was pushed closer to my mouth which made it harder to talk. There I was, restrained, blindfolded, gagged, and unable to move much at all. I struggled more against my restraints but I was firmly held down to the table. I was enjoying this a lot.

I started to get a bit overheated and my neck was starting to hurt because of the prolonged position. The guys fixed these issues and I was able to continue to lie restrained and cocooned on the table for another two hours. In the dark, blindfolded and unable to move, I continued to struggle and feel my restraints. It was bliss. It was thoroughly enjoyable. There was no rush to release me… but unfortunately I had to catch a flight that same day.

I can only say that the SeriousBondage Institute is a great place for bondage. Their website features many unique and interesting methods of restraint; many of which I would like to try. I will definitely visit these guys again and I hope to experience other interesting forms of restraint in the future.

A note to MummyEd, Dalton and Mark – instead of your website being called Serious Male Bondage, you should call it Superior Serious Male Bondage. I have never been tied up like that before, and want to do it again just as soon as I can! Thanks again guys for a wonderful and memorable experience. I can’t wait till next time. ~Humane

For photos and a video of this scene visit SeriousMaleBondage.com. Also visit our companion website featuring both men and women SeriousImages.com.