The basic binding materials are rope, leather, metal and tape.  Mummification is normally done with tape, usually over plastic wrap.  Leather doesn’t need to be done, since clothes like sleepsacks can be made with leather which do the job of mummifying.  Once I saw a picture of someone mummified in rope.  This was done by a guy in France and pictured on GearFetish.com. That left metal. So, naturally, I wanted to be mummified in metal, something I’d never seen pictured before.  The obvious metal to be mummified with was chain.

I had been discussing this with Mumman (on fetlife.com) to do this to me when we were visiting the SeriousBondage Institute at the same time.  I knew that there was about 100 feet of chain at the Institute, all in short lengths which could be connected.  I figured that 100 feet would be enough to go completely around my body.

One of the problems would be to make sure that the chain did not move when put on.  Being heavy, gravity takes effect.  I figured that it would be best to have it applied while lying down.  But that brought in other problems, since it would be easier to wind it around me when I was standing.

To prevent the chain from moving it would be necessary to pull it tight.  But that would mean problems with cutting off my circulation.  I decided it would be best to wear my leathers to provide some support and protection since they were extra thick around the wrists and the neck.  The only part that I didn’t have leather to cover was my hands, but I figured I could borrow some leather gloves.

Mumman wanted me to be lying down on the bondage board.  That would mean wrapping chain around both me and the board, and that would mean we needed more chain. One hundred feet would not be enough to do it all.

Mark took both of us to a hardware store to get some other supplies, and also to purchase another 100 feet of chain.  That would give us 200 feet total, which should be enough to do the chain mummification.

After returning from the store we got the deck cleaned up, the board placed, and got me ready by donning my leathers and lying down on the board.  It soon became apparent that there was another problem.  To use the newly purchased 100 feet of chain would require putting one loop over me and dragging the other 98 feet of chain under the board and up again for the next loop – and then drag 96 feet of chain down and under again.  That wasn’t going to work.  So Mark brought out some bolt cutters and cut the 100 feet into more manageable lengths, with some connectors to hook them up.

Mumman started by wrapping a length around my chest and connecting it.  Then he began the long task of wrapping chain around me, one loop and dragging the rest over, then another, and dragging the rest, going down my body toward my feet.  Luckily another guy Bind (fetlife.com) arrived and jumped in to help Mumman with this demanding process. 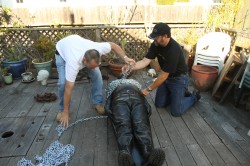 Round and round went the chains, pausing periodically to hook up the end of one length to the start of the next length.  This continued until the newly purchased 100 feet of chain was all used up, which occurred around my crotch.  Once that happened the shorter lengths of chain were brought out, connected together as needed and the wrapping continued.

The second batch of miscellaneous chain pieces allowed the mummification to continue down to my ankles before there was no more.  At that point they gathered a few other short pieces which were lying around and wrapped my feet, however there was none left to wrap around my shoulders and neck.  As it turned out, 200 feet of chain was not enough for a head-to-toe mummification. The guys couldn’t believe it, but the end result was quite impressive anyway, as the picture shows.

For the grand finale, a rusty and much heavier piece of chain was wrapped around my torso over my cock. It’s weight provided a pleasant pressure which added to my overall entertainment.

In the end I was satisfied with the result, although it wasn’t exactly what I had originally wanted.  I wanted to be completely mummified in chains.  Oh well.

As the guys were standing around admiring their handiwork, two minor problems came up.  First, I was not completely over the sinus infection I had gotten in the spring.  So the tight leather hood, nose holes only, had to be loosened for my breathing to get around the sinus build-up.  So, I guess it was just as well that there wasn’t enough chain to cover my head.  Second, the leather gloves I’d borrowed were not thick enough, and the tight chains started to cut off the circulation in my fingers, which were getting tingly.  This was easy enough for me to get around by moving my hands out from under the chains.

I was left for thirty minutes before it was time to have the chains removed.  I wondered about singing a few chords of “Unchained Melody”, but with the sinus build-up, my voice was not up to it.  After the chains were removed, I had a nice pattern of periodic red indentations all over the front of my body made by each link of the chain.  That was not a big deal, and overall I thought that this project was a decent first-attempt at a full body chain mummification – something I’d not seen done anywhere before. ~Mister X

For a video of this scene visit SeriousMaleBondage.com. Also visit our companion website featuring both men and women SeriousImages.com.