After my friend ModeNarr’s great “puppy” mummification suspension which he enjoyed immensely, he wanted to come back for more. This time we would do a strict horizontal suspended mummification. I fixed the suspension points on a metal Unistrut bar and hooked it to the 2 overhead hoists. I got ModeNarr into position, with a cushioning piece of material along his 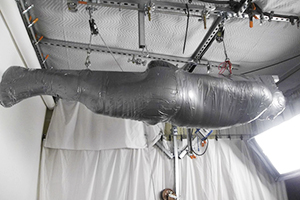 spine, and busy with the wrapping. First I had him kneel on all fours and heavily wrapped his torso to the bar with pallet-wrap, reinforcing him with duct-tape tightly wrapped around.

Fur extra fun he was wearing a heavy latex hood with mouth and eye openings, and a Birdlocked silicone chastity device.

I wrapped one leg up to the metal bar, then the other, over his feet, getting him solidly wrapped up over his hips with multiple layers, smushing his chastity device down as he moaned loudly. Then I strapped tight padded leather fist mitts on his hands to keep them helplessly balled-up and out of mischief, then wrapped around each arm individually. I pulled his arms up over his hips and pallet-wrapped them, pinning them to his sides. (all of this detail you can see in the video on SeriousMaleBondage.com which is linked at the bottom of this page) Next, his shoulders, neck and head were pallet-wrapped to the bar to get him firmly attached with proper safe tensioning, including over his mouth, and I cranked him up a bit. He was in a nice straight horizontal immobilized position, and loving it. 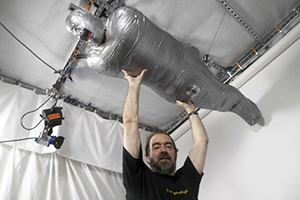 Now, time to get him completely wrapped-up in the silver duct-tape. Around and around I went with the rolls of tape, smoothing it down, with nice snug tensioning, making sure he was doing OK as I went along. I applied multiple layers for strength and stringency, as I needed to have him completely immobilized. I carefully wrapped the tape around his head, being very careful to not make it too tight, asking him it it felt OK as I went along. Before we started this entire process ModeNarr had inserted his own stainless steel ass-hook into himself so I got a string and tied it up to the front hoist hook for proper tensioning. I threaded it through the hook’s fastening hole and through a hole in the Unistrut bar, tying it tautly to the front hoist hook. He moaned apprehensively and pleasurably as I got it tightly tensioned. He was enjoying it. You gotta see the video to appreciate this. 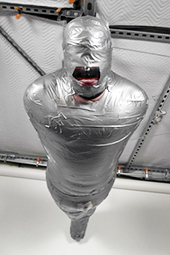 I proceeded to tape and tape all over him with proper  tensioning, including over his fist-mitts making, it as neat as possible and smoothing the pieces down, but leaving a square area around his plastic-wrapped-down chastity device uncovered by the duct-tape. I was very thorough and the process took quite a bit of time. I kept checking that he was doing alright. He moaned affirmatively, but his nose was getting runny and clogged so I removed the wrap and tape around his mouth and he was fine. I cranked him up higher off the floor, checking underneath for complete duct tape coverage. At last he was a tight, completely mummified effigy, unable to move at all. 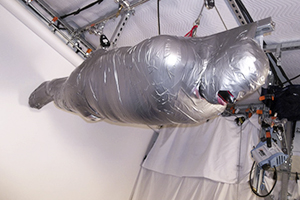 My friend Mark and I took pictures with my camera and I got him cranked all the way up to the ceiling. It was a great scene. He enjoyed his elevated mummification for as long as possible, until an issue was developing with soreness and numbness in one arm. I lowered Modenarr down and he stayed for a while until he said it was time to be cut out. I lowered him to the floor covered with pillows, and cut him out bit by bit, starting with his arms. He began moving them in relief as I carefully cut the rest of him out, untying the ass-hook from the suspension assembly. He was sweaty and ecstatic, in that wonderful post-heavy bondage glow and euphoric state that many of us know about. I was very happy that I could give him this second suspended mummification experience that had worked out so beautifully. He felt ecstatic and was very thankful for the experience. It is extremely gratifying to be able to do this for him. A lot of us only want to be put into bondage, but to do the bondage for another person is a gratifying and wonderful experience. To help someone achieve their dream bondage/mummification experience is a beautiful thing! Turnabout is fair play!  ~Mumman

For a video of this mummification scene please visit SeriousMaleBondage.com. Also visit our companion website featuring both men and women at SeriousImages.com.